“Post once per day. Even if it’s just a quote or a quiz or some shit. Easy enough.”

It should be, especially when a) no school; b) not going much of anywhere; c) no nothing. (Damned double negative, but it is what it is.)

The last few days have been pretty good. Our pool is open now, and we’ve had some fun in it. It has shockingly been too cold for me, though. I swear, I must be one of those people who can never be happy, as I am someone who always complains about the heat, yet I’m too cold in the pool. The temp dropped a little, and I tend to get in the pool in the late afternoon/early evening, so it got me chilled. The boy stole my good warm towel tonight and then only got me a thread-bare towel from inside, which didn’t help at all. When things return to normal in a few days (read: lower 90s, real-feel closer to 100), the pool won’t be close to chilly in the evenings.

I finished the JHU course on COVID-19. It was very interesting, albeit frustrating to complete with the children around. (Note to self: don’t sign up for any classes you have to pay for before the pandemic ends and they go back to school.) I’m adding Masters in Public Health to my list of degree programs to consider.

The whole pandemic thing has created a lot of anxiety, especially as of late, and I’m prone to obsessing over everything that comes out on it. My poor husband is so over it, since he’s My Person, which means he’s the one I show every chart, graph, news article, etc. I tend to get myself worked up over it big time. He has been trying to get me to stay away from anything COVID related for a few days and focus on cheerful stuff when I get online, but…”anxious brain gonna do its own thing” or something. (Thank the good lord for Xanax right now, it has been rough for reals.)

I’m getting really dismayed at how many of my Facebook friends think it’s a joke. Even the ones in healthcare. When the subject of masks came up, my closest friend told me that she’s a home health nurse, so she knows how to stay safe. Just wash her hands and try not to get up in anyone’s face. Isn’t that what people typically do anyway? Yet here we are. 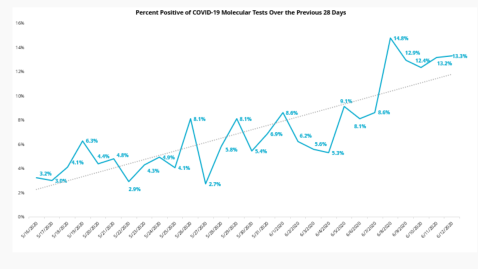 Nothing to see here.

I’ve been taking screenshots each day and tracking the data released into my own spreadsheet after noticing that the state changed their stats days later. Our state is so damn sketchy with this. Maybe all states or countries are, I dunno. It only adds to the whole “driving me nuts” thing. And to me driving my husband nuts.

I need a new hobby.

For another thing that drives me nuts —

That’s so much my husband. He claims that he can hear where the stud is in a wall, and then proceeds to hammer in a nail where there is most certainly not a stud. And then he moves half an inch over, where he hears the new stud, but there’s not one there, either. We hung some floating shelves last weekend, and FUCK. How can someone just not give a shit and hammer nails all over the place?!

Hanging those four shelves showed just how different we are.

We ordered four shelves from Ikea to hang in the living room — 2 x 2. Even if they were off just 1/16 of an inch, it’d be obvious. After much measuring and stud-finding, we got them up. Perfectly. My whole “measure 10 times, cut (well, hammer) once” approach is so the opposite from him. He’s all “let’s not bother measuring or using a level; it’ll work out, and if it doesn’t, we’ll hammer as many holes as needed to make it look decent.”

(By the way, not to shit on my husband, but he’s as good at hearing studs in the walls as he is picking out watermelons. He swears that he has a foolproof approach to getting watermelons, which involves him holding the melons next to his ear and knocking on them for what feels like a full minute. Or eternity. He claims he can tell from the sound how ripe the melon is. Rarely are the watermelons perfectly ripe the way he likes them, which works out well for me since I like mine a bit less ripe. Coronavirus silver lining: I don’t have to be embarrassed by him banging on melons at head level in the grocery store anymore since we aren’t shopping normally.)

4 thoughts on “Days Whatever Through 15”