I’m so thankful we got to get away for our 3-day cruise! And I really missed the kids, so three days away was enough. (Although they had me rethinking that an hour after getting home and fighting and stuff lol.) But, as a cruise addict, I’m ready to get on a boat again and am planning. (Never mind the fact that we already had one scheduled for June for the whole family.)

Cruising isn’t for everyone, I know, but I love everything about it. If you want a few days with literally no responsibilities and nothing to worry about or take care of other than your kids if they’re along — and don’t mind being on a crowded ship in the middle of the ocean — then cruising is the best.

Cooking? Don’t have to, there are restaurants and buffets and snack bars and free room service around the clock. There’s so much variety, too, although I eat literally the same thing for breakfast, lunch, and dinner every day. Cleaning? Don’t have to do that, other than put away your clothes and the such. (And if you don’t do that and your kids leave their shit out, the room steward will take care of that, too, as we shamefully discovered on the first family cruise when they came to take care of the room earlier than we expected. That didn’t happen again.) Entertainment? Round-the-clock entertainment such as music, comedy shows, trivia, games, water slides, the casino, and more is right there. And omg, someone bringing me all of the boozy drinks I can stand.

Cruise life is the best life for me.

Our port on this trip was Nassau, which I’ve been to several times. We usually do a beach day, but we opted for doing a self-guided walking tour of Nassau this time. We walked down to Junkanoo Beach so we could get a taste of the ocean and hung around sipping on daquiris for an hour and then moved on. We saw a bunch of old cathedrals, toured a chocolate making place, and visited some other places, but our favorite was touring the rum distillery there. After touring, we settled in at the bar and got the best drinks of our lives. The pina coladas were amazing, and I’m pretty sure I’ll never have one that well-made again (until we go back). A lot of rum settled in at the bottom, and it actually tasted very good (I usually hate the taste of liquor on its own). I barely made it through my first one before buzzing and had to sit there for a while to finish the second.

We ended up walking about five miles around Nassau, according to my iPhone, and saw so much. My feet were swollen by the time we got on the boat, but it was well worth it. My husband and I both agreed that was our favorite visit to that port. Since we’re planning on only 3-day cruises for our personal trips in the future and Nassau will be the only port for such a short cruise, we want to do something similar each time. The plan next time is to hit up as many museums. They have a Pirate-themed escape room that looked like a lot of fun, too. 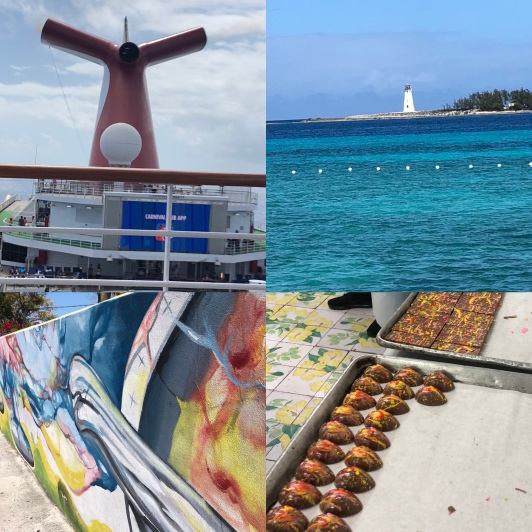 I was kinda nervous about coming up with the flu or another virus, but so far we’re fine. I didn’t see anyone so much as cough, and there are sanitizing stations everywhere. I still had a little bit of the crud when I got on the boat (I’m not contagious, it was still lingering from January), but started feeling good by the evening and didn’t take my medicine the whole time. Of course, now that I’m off of what should be germ central, I’m all congested again. I think all of the rum helped me fight off the crud, so I should probably start having a rum drink or two to keep the crud away. (Or maybe, just maybe, it was the Vitamin C in the drink. Hmm.)